A few years ago I read a book called “Five Patients – The Hospital Explained“. It was written as a work of non-fiction by Michael Crichton, an author better known for his thrilling fictions like: Jurassic Park, The Lost World, The Andromeda Strain, Rising Sun, Disclosure, Congo, and Sphere – to name just a few. He was also the writer behind movies such as Twister and Coma, and the popular television series ER.

I know, hard to believe isn’t it? But before delving into literary adventures involving dinosaurs, aliens, viruses, mystery and intrigue, Crichton was a medical student at the Massachusetts General Hospital in Boston in the late 1960’s.

The book was interesting because it took the medical cases of five patients and then goes on to describe their hospital experience, the context of their treatment, and the practices and culture of hospitals in that time period. Crichton also highlights the rising costs of medical care, national healthcare schemes, drug prices, and healthcare politics.

The medical practices described in the book – both the culture, technology and finances – have changed significantly since the book was written, but the text was left as is to give us a comprehensive glimpse into the past. And it is somewhat frightening!

You are made aware of the fact that, even though medical technology, innovation and knowledge is continuously advancing on a daily basis, medical care 50 years ago was a barely-adequate and unevolved industry, claiming knowledge and expertise, and demanding status and respect. But in reality medical health care was still very much in the dark ages with the most advancements and discoveries only having been made in the last half of the previous century.

Allow me to give you a few examples: 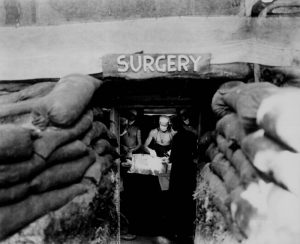 Although antibiotic-like drugs were first described in 1877, the first commercially available drug would only be released in 1939 and used to the Allied troops’ advantage in the Second World War.

Anaesthesia was used in the mid-1840s but were primarily comprised of either opium or alcohol. In 1846 Ether was developed and successfully used, and Chloroform and Nitrous Oxide were also popular means of sedation. The first hospital anaesthesia department was established at the Massachusetts General Hospital in 1936.

In 1918 a flu pandemic killed at least 50 million people around the world. Doctors were unable to cure their patients and nurses could only see to their comfort. Many theories have attributed the high death toll to Aspirin poisoning.

Sterile or antiseptic surgery was only discovered and developed from 1867.

Female physicians were frowned upon before the 1970s and it was very difficult for them to enter any field of medicine, except as nurses.

Radiography started in 1895 with the discovery of X-rays, but Ultrasound was only introduced in the 1970s and MRI in the 1980s.

Laparoscopic surgery was only broadly introduced in the 1990s, and Remote surgery in 2001. 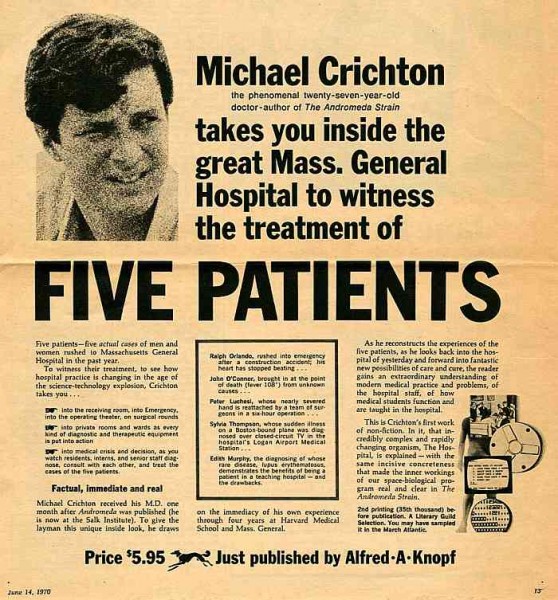 In the 1994 reprint of the book Crichton included the following author’s note:

“When I reread the book recently, I was struck by how much in medicine has changed – and also, by how much has not changed. Eventually I decided not to revise the text, but to let it stand as a statement of what medical practice was like in the late 1960s, and how issues in health care were perceived at that time.”

Another twenty years have passed since this note and Crichton’s comments still ring true. Much has changed, and much remains the same. The system of training new physicians has changed little, but interns no longer have to work those torturously long shift hours (in many countries at least) . Technological advances have certainly changed the way in which certain services are delivered, but third-party payers, such as insurance companies, have much more to say about what services a patient may receive and how.

Many of Crichton’s hopeful predictions of the future of hospitals and healthcare has unfortunately been killed off by the constant threat of lawsuits, government intrusion, money, and medical tradition itself. Computers and technology could have revolutionized medical care much sooner, but were primarily used for billing purposes and data collection for payers.

However, as I said, the medical industry is a constantly evolving animal, and one can only hope that it keeps on moving forward with the primary mind-set of patient care, and not outside influences.